Book   »   Cosmotechnics: For a Renewed Concept of Technology in the Anthropocene 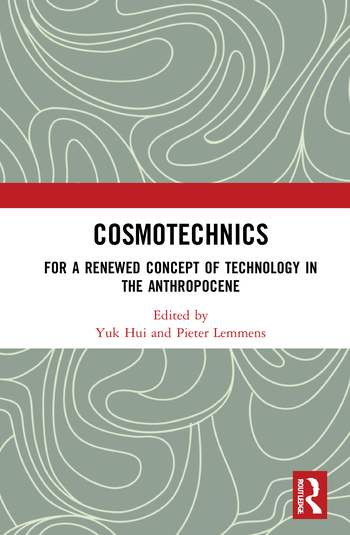 This volume reflects on the meaning and the implications of Yuk Hui’s notion of cosmotechnics, which opens up an anti-universalist and pluralist perspective on technology beyond the West.

Martin Heidegger’s famous analysis of the essence of technology as enframing and as rooted in ancient Greek techne has had a crucial influence on the understanding and critique of technological society and culture in the twentieth century. However, it is still unclear to what extent his analysis can also be applied to the development of technology outside of ‘the West’, e.g. in China, Africa and Latin America, particularly against the backdrop of receding Western domination and impending global ecological disaster. Acknowledging the planetary expansion of Western technology already observed by Heidegger, yet also recognizing the existence of non-Western origins of technical relationships to the cosmos, Yuk Hui’s notion of cosmotechnics calls for a rethinking – in dialogue with postcolonialism and the so-called ontological turn in contemporary anthropology – of the question concerning technology which challenges the universality still present in Heidegger (as well as in Simondon and Stiegler) and proposes a radical technological or rather cosmotechnical pluralism or technodiversity. The contributors to this volume critically engage with this proposal and examine the possible implications of Hui’s cosmotechnical turn in thinking about technology as it becomes a planetary force in our current age of the Anthropocene.

The chapters in this book were originally published as a special issue of Angelaki.

Introduction: Cosmotechnics and the ontological turn in the age of the Anthropocene

1. Other turnings. Yuk Hui’s pluralist cosmotechnics in between heidegger’s ontological and stiegler’s organological understanding of technology

5. Noodiversty, technodiversity. Elements of a new economic foundation based on a new foundation for theoretical computer science

6. Technics and agency. The pluralism and diversity of technē

7. Philosophy in the light of AI. Hegel or Leibniz

8. Towards a fifth ontology for the Anthropocene

10. Equivocations of the body and cosmic arts. An experiment in polyrealism