Publications expect readers, unless the author ignores the publicin his publication. Understanding reading is one of the major conditions for imagining new ways of publishing. The condition of reading also depends on means of writing, writing means publishing, then we enter a circle of reading-writing, that constitutes without exaggeration the social, political, economical condition for acting and thinking. Jack Goody has explored in The Domestication of the Savage Mind, how the emergence of writing, in its most primitive form, transform these conditions in human history. The use of tablets in the Sumerian culture in Mesopotamian as writing system become today we may call the first system of metadata, that record stocks of potteries, cattle, etc. And David Graeber further in his Debt- The First 5,000 Years, showed that such a writing system is actually a book-keeping system, usually a new conquerer destroyed this annotation-writing system to resettle all debts, and restarts a new economic, social and political regime (And it is from this example, Graeber proposed a destruction of the current global accounting system to start anew). It is also true when writing spread out in ancient Greece, it made laws accessible to citizens in the polis, that is also to say the concept of democracy.

These technics of writing are in constant progress, from pictogram, phonogram, to stamp making, to printing, and now we arrive at digital publication at the mid of last century. We have to bear in mind that technical innovation always underlines displacement, displacement doesn’t mean replacement, displacing something means rendering something before it obsolete, but it doesn’t mean it could replace it, including all its values and functions. The emergence of the web brought us a new perspective of publication which is no longer linear, but one that allows one jumps from one reading to another. This vision of hypertext was already imagined by Ted Nelson before the invention of the web. In order words the web realized some of the visions of Nelson, particularly on the aspect that the web is a hypertext system that links all relevant literatures together. Then came the war of reference-searching (or an economy of links), this is what we know today as search engines, and then we have the history of Yahoo, Archie, Veronica, Altavista, Google, etc. Searching is an experience which cannot be separated from online reading today, it can be searching the definition of a word, searching theory of an person not well explained in the reading, etc. The new possibilities, not only those of business and innovation but also new way of acquiring knowledge – reading – open a new terrain to reconsidering the condition of reading-writing and the social-political transformation corresponding to these conditions. And these questions are are the core of digital humanities, if we still want to keep this name. 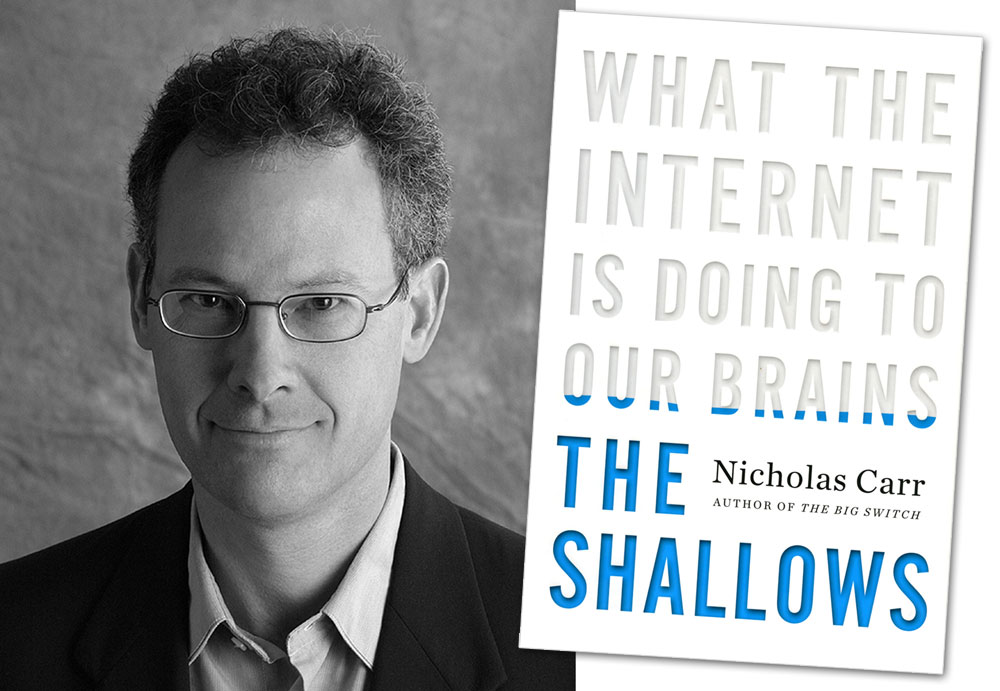 Nicolas Carr, an American journalist, who has published extensively on the question of neuroscience and technology, has suggested in his book The Shallows: What the Internet Is Doing to Our Brains, that our daily use of computers, mobile phones are changing the way our brains process information. Starting from a passage of Plato’s Republic, Carr proposes that what is at stake in Plato and Socrates’ attack of poetry is not poetry itself, but rather the oral form of poetry. Carr pointed out that at the time of Plato, poetry wasn’t a written literature as we perceived today, but rather “represented the ancient tradition of oral expression” (we understand that this attack is much more complicated than this). Thus, Plato’s attack on poetry is actually a critique on the possibility of the brain in related to certain kind of “reading”. Such an interesting reading of Plato though a bit suspicious, it highlights the core idea in most of Carr’s writings, the configuration of the brain is directly related to writing and reading. Carr further explicit this proposition by quoting a professor of psychiatry:

GARY SMALL, A professor of psychiatry at UCLA and the director of its Memory and Aging Center, has been studying the physiological and neurological effects of the use of digital media, and what he’s discovered backs up Merzenich’s belief that the Net causes extensive brain changes. “The current explosion of digital technology not only is changing the way we live and communicate but is rapidly and profoundly altering our brains”1

Carr’s proposition, proposed that we should look into the plasticity of the brain. The brain is modelled and re-modelled in repetition, that is to say how habits transformed our mind, instead of being a epistemological consequence as Hume showed in his treaties. When we are certain of something, it is not that we know it for sure, but we know it through repetition, that is also habitude. The famous Humean example is the billiard game, how can I know that if I think the white ball from this angle, it will hit another ball to goal? It is through repetition that we build up this “certainty”. The neuro-turn is suggesting something else, it is not simple knowledge, but the configuration of the brain (which is semi-permanent or could be permanent). This concept of the plasticity of the brain brings us anew many old philosophical questions, here comes the first is the question of the Kantian transcendental, since considered as such, the transcendental faculties suggested by Kant (which is always already artificial), is now modifiable, meaning what Kant proposed is probably not wrong, but one can also create a new model of transcendental faculties by carrying out a series of brain stimulations.

Katherine Hayles, a well-know literal scholar, also one of the experts who wrote about the history of cybernetics and researched extensively on digital humanities, in her book How we think: Digital Media and Contemporary Technogenesis, posed this question: How do we read? Drawn from Nicolas Carr’s book The Shallows, Hayles proposed that digital reading is bring close reading which was crucial in the tradition of literature studies to an end. The other reason is also, as Hayles says, the reflection of the effectiveness of close reading within the discipline of literary studies, close reading is also a symptomatic reading. The problem is caused by the re-distribution of neural activities. Carr distinguishes two kinds of memories, working memories, and long term memory. Working memory is the moment of consciousness (comparable to Husserl’s primary retention), it deals with simple task, for example holding a telephone number for some seconds in the mind; long term memory is something we can still remember tomorrow or after, it becomes part of my system of knowledge (comparable to Husserl’s secondary retention). While in order to deal with complexity, working memory has to be transferred – through repetition – to long term memories. Hence Hayles claims:

The small distractions involved with hypertext and web reading– clicking on links, navigating a page, scrolling down or up, and so on – increase the cognitive load on working memory and thereby reduce the amount of new material it can hold. While linear reading, by contrast, the cognitive load is at a minimum, precisely because eye movements are more routine and fewer decisions need to be made about how to read the material and in what order. Hence the transfer to long-term memory happens more efficiently, especially when readers reread passages and pause to reflect on them as they go along2.

Carr’s explanation resonates with Hayles’ own theory on the question of attentions. As Hayles observed the younger generation has more and more shallow attention, but not deep attention.Carr’s example of Bruce Friedman can probably gives us a good illustration. Bruce Friedman, a pathologist from Michigan University, who according to Carr blogged often about the use of computer on medicine, confessed to him in an email “I can’t read War and Peace anymore,” he admitted. “I’ve lost the ability to do that. Even a blog post of more than three or four paragraphs is too much to absorb. I skim it.3” One finds hander and harder to pay attention to a complicated theory or book for some hours. Our attentions are dispersed everywhere. The mode of hypertext reading extends to the computer, even when one is not reading a web page, one may run into Facebook, Twitter, checking emails, watching Youtube constantly, without being able to focus on one thing at a time.

However compared with Carr, Hayles hesitates to go completely into discourse and experiments in neuroscience (that is also probably why she stays at the question of attention), as she writes: “although Carr’s book is replete with many different kinds of studies, we should be cautious about taking his conclusion at face value4”. What shared between Carr and Hayles besides of the above theory of memories, is the hope that this new mode of reading is bringing us something else, and now it remains a moment of indecision which is waiting for our further exploration and experiment. In his further conversation with Nicolas Carr, Friedman claimed that “he has “never been more creative” than he has been recently, and he attributes that “to my blog and the ability to review/scan ‘tons’ of information on the web.” Indeed, it seems that by hyper reading one will be able to integrate a lot of facts into a unified frame, to associate different ideas together. Hayles further proposed another type of reading which she calls machine reading, simply speaking, the ability of machines to analyse large amount of data that a human mind finds impossible to deal with, and by reading through these data, machines can help us to absorb hidden knowledges of these data.

Hayles proposes a more systematic way to look at the challenge posed digital reading-writing. The vision is to have “synergies between close, hyper and machine reading”. This seems to be a quite important question for publishing today, since if none of these readings alone is going to work, what can publishers and designers do when they publish books? This is no longer the question, like if an e-book need a beautiful cover, or should it be published in PDF format or Epub (saying so, these are also important questions), but rather what kind of reading experiences can be enabled by new form of publication? Which form of experience is more desirable than others? What kind of attention can be created/desired by these digital entities and the metadata of digital objects? What is the possibility of integrating temporal objects such as audio and video within books (to distinguish from audio-book and film).

Next: The condition of Reading (2)– Bernard Stielger vs Michel Serres

出版: “For a Technodiversity in the Anthropocene” in Techné Logos and the (Neg) Anthropocene: the First Annual Conference of the European Culture and Technology Laboratory (Dublin: EUt+ Academic Press, 2022)