Muriel Combes’ reading of the notion of information in Simondon is a faithful one, her introductory work to Simondon is exciting as well as critical. Her book was widely quoted in authors such as PaoloVirno, Alberto Toscano, etc. In fact, Simondon himself conflated several conceptualizations of information in cybernetics. In L’individuation psychique et collective, Simondon asks ‘Would it be possible to use the theory of Shannon, Fischer, Hartley, Norbert Wiener? What is common to all the authors who founded the theory of information is that for them information corresponds to the inverse of a probability[1]’. As demonstrated in the previous note, it would be problematic to simplify the definition of information as such. Simondon follows, ‘the theory of information is the point of departure of an ensemble of researches that have found the notion of negative entropy (or negentropy) showing that information correspond to the inverse of the processes of degradation and that, to the interior of all entire schema, information is not definable from a sole term such as the source, or such as the receptor, but from the relation between source and receptor’. Consequently, Simondonalso conflated the concept of information with the communication model proposed by Shannon and others,  ‘one could say that the receiver poses the question: what is the state of the source? And information is what brings the response to the receiver. That is why it is possible to represent the quantity of information as – log P, P being the probability of the state of the source.[2]’ In certain sense, Simondon adopts here the notion of information of Ralph Hartley, who used a very technical understanding of information in his 1928 paper Transmission of Information. Information for Hartley in this context is a measure of quantity that reflects on the receiver’s ability to reassure that it is an intended message.

One probably can see Simondon’s critique of information as a strategical one. The ambition of Simondon is to find a general theory which can be applied in the domain of cybernetics as well as in the psychological and sociological domains. One must bear in mind that the project of Simondon, from the very beginning is to discover the axiomatization of human science, as Xavia Guchet shows very well in his book Pour un humanisme technologique : Culture, technique et société dans la philosophie de Gilbert Simondon (2010). Hence Simondon proposes that ‘ one cannot accept without modification the theory of information in the domain of psycho-social because in this domain, it is necessary to find something which permit qualifier the better form as being the one possesses the highest degree of information, and this cannot be made from the negentropy scheme, from the research in probability.[3]’ What does it mean by this? Simondon continues ‘in other words, it is necessary to bring a term non-probability to the theory of information. Maybe it would be possible—and this is the point of departure from the personal thesis that one would present now—of saying a quality of information or a tension of information’. 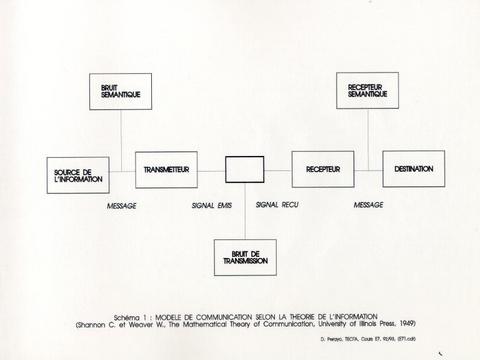 Hence for Simondon information implies a difference, which is necessarily a tension. Simondon’s critique the notion of information in cybernetics would seem reasonable, if one didn’t pay attention to the debates in cybernetics itself. If one can say something on that, Simondon’s critique seems directing more to Wiener who he was aware of the works, but not so much towards Shannon (though these kinds of comparison may not be necessarily productive). For Shannon, information corresponds not to the inverse of probability, but in contrary it is surprise, that is to say things that are not redundant. To explain redundancy here, lets consider an English word starts with ‘q’, the next hint of ‘u’ will be redundant, that means it doesn’t carry information (it doesn’t produce an effect to the present). Entropy for Shannon means ‘of how much “choice” is involved in the selection of the event or of how uncertain we are of the outcome’[4]. One has to pay attention to the word ‘selection’ here, since it is not knowing or calculating, but selecting. One is exposed to selection rather than simply knowing as a direct experience, being is being selective and surprised (it is also widely discussed in one of the trendy theory in cognitive science: predictive coding), this  definitely finds a resonance with Simondon, especially in Cours sur la Communication (1970-1971). In this less technical sense, information is that makes a difference that creates a new possibility. Simondon’s information proposes a new criterion, meaning that the difference must be a tension, which triggers further differences. Simondon then proposes to understand from the perspective of energy, or maybe one can say to leave a discrete conception of information in order to return to a more concrete (or thermodynamic) understanding of information.

A New Theory of Information

An energy-based understanding of information nevertheless is very fruitful: firstly it makes the notion of information universal in the domains of both human science and natural science, such an unification proposes a connection which goes beyond analogy. Wiener, as Simondon noted, has said ‘it is very difficult to make intervention of the theory of probabilities in the social domain.[5]’ To some extents,  J. C. R. Licklider seems having some insights to anticipate Simondon ‘it is probably dangerous to use this theory of information in fields for which it was not designed, but I think the danger will not keep people from using it’[6]. Secondly it also proposes a systematic view of information, in Simondon’s own term, it goes away from an emitter-receiver model to one that concerns the milieu as a whole and plug it back to his mechanology; Thirdly it allows Simondon to go back to the question of form, and be able to articulate what does he mean by a ‘bonne forme’, a ‘meilleur forme’. These three aspects I believe point to the core of Simondon’s model of individuation. How then does an energy view of information contribute to the idea of a good form, and how does it help to prepare for the discussion of the transduction and individuation? When we move to the discussion on form and information, it maybe interesting to see Simondon’s arguments as a demonstration of what he means by disparity [la disparation] and metastability[le metastabilité].

Simondon’s critique of forms attends its highest clarity in L’individuation Psychique et Collective, where he identifies two concepts of form one can find in Plato and Aristotle. For Plato, there is the form in archetypes, meaning that forms are rigid and predefined idea that is at the same time transcendent. For Aristotle, Simondon suggests that there is a new conception of form, which serves as a critique of Plato. In Aristotle’s hylomorphism, one finds a form which is more sensible, that is to say it is not imposed as a necessity, but the matter finds its own form, hence Simondon suggests there is a process of ontogenesis underlying in the theory of Aristotle. Simondon’s reading shares the same view of Heidegger, who reinvent Aristotle as a critique of modern technology which is tantamount to a misreading of Aristotle. Simondon seems to favour Aristotle over Plato in this aspect, but he didn’t give up the form of archetype, what Simondon suggests is to find a theory which encompasses both archetypical and hylomorphic forms through a new theory of information, while information can also transverse the concept of forms and create a more flexible and dynamic view of the ontogenesis of individuals. Simondon finds this possibility of unification in the concept of field (electromagnetic and psychological) and energy states (in the subatomic level).

[4] Shannon and Weaver, The Mathematical Theory of Communication, 18